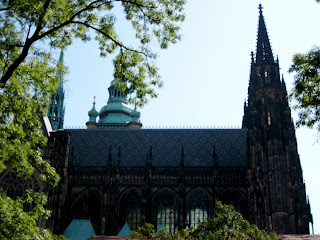 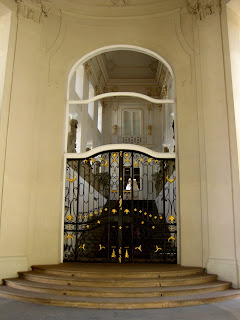 gateway into one of the buildings of Prague Castle 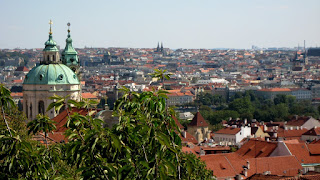 view from the top of Prague Castle 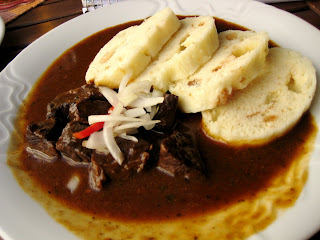 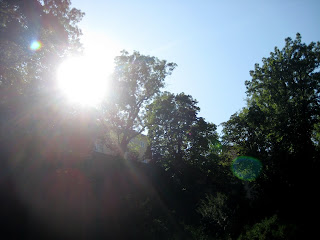 The sun! I had forgotten it existed!
This morning I went to Prague Castle, then walked about the city for a bit. It was beautiful outside--sunny and warm. I think that I had forgotten that it still is, technically, summer. I should probably wear sunscreen tomorrow, which makes me really, really happy.
To get to the castle, I walked with a friend I met at the hostel, then took the metro a few stops, then took the tram to get up a giant hill. We walked around the gardens for a little bit, then he left to go work in the studio so I spent part of the afternoon wandering by myself. I checked out some of the interior of the castle, but didn't go inside anywhere. There were some great views of the city from the top as well.
I walked down a giant staircase, looked at St. Nicholas Church, and got lunch. I had goulash with potato dumplings, which is a traditional czech dish, which was pretty delicious and filling.
Walking back towards the hostel, I went over Charles Bridge, which is probably the most famous tourist attraction in the city. There are thirty statues lining it, and there were a ton of people and street vendors on it as well.
After this I visited the astronomical clock, which is also really famous. It was built in 1410, so it's been around for quite a long time. It's actually mounted on the side of Old Town City Hall in the Old Town Square, it's not freestanding. When the bells toll, which is every hour, two windows open and twelve apostles rotate through and face the crowd, and at the end Jesus appears, and the figure of Death rings a bell. The clock doesn't just tell the time, either--it also tells the date, what time sunrise and sunset will be for the current day, which zodiac sign the planets are currently in, and some other stuff too.
After this I just walked aimlessly for a bit, but took the metro back to the hostel to take a short nap. The metros here seem to be really deep underground--to go back up to street level, you have to take this really, really long escalator (it's kind of scary to look down when you're going up it, I swear it's half a mile high). The metro reminds me of the one in Boston, so I've found it pretty easy to navigate it so far.
Tomorrow I think I'm going to visit some museums maybe, or just wander.
Posted by Unknown at 9/08/2009 01:44:00 PM