My two-month vacation ended quite some time ago, but I'm still doing a bit of catch-up on the blogs.
One of the best things that I did while in South Korea was attending the annual Holi Hai festival in Busan. The festival itself is Indian, and the entire event was organized by a group called Indians in Korea. The group basically tries to raise awareness of the cultural heritage, one of which is this particular festival

Holi Hai, otherwise known as the Festival of Colors, celebrates the coming of spring, the joy of friendship, and equality for all. People who attend are encouraged to wear white (so the colors show up better) and clothes that you don't mind will get ruined. The colors symbolize happiness, love, and the freedom to live vibrantly.

The festival in Busan happens every year on beautiful Haeundae Beach. You have to register before the event, and when you arrive you receive a samosa, a coke, and a packet of brightly colored powder. There's live music, dancing, street food, and booze everywhere. I think the Koreans that went to the beach to sunbathe were just a tiny bit confused by the giant, brightly colored festival happening on their favorite spot to hang out. It was a great day -- the weather was beautiful, I was with some of my favorite people, and I got to experience a festival that I have wanted to attend for ages. All in all, a great day! 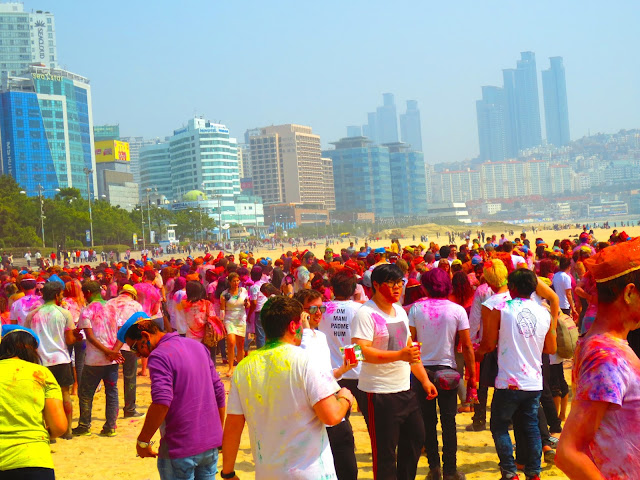 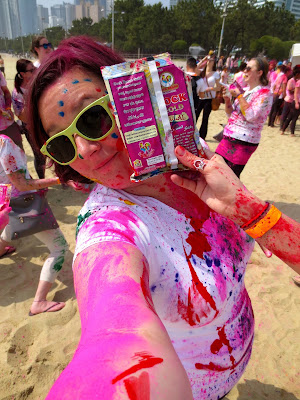 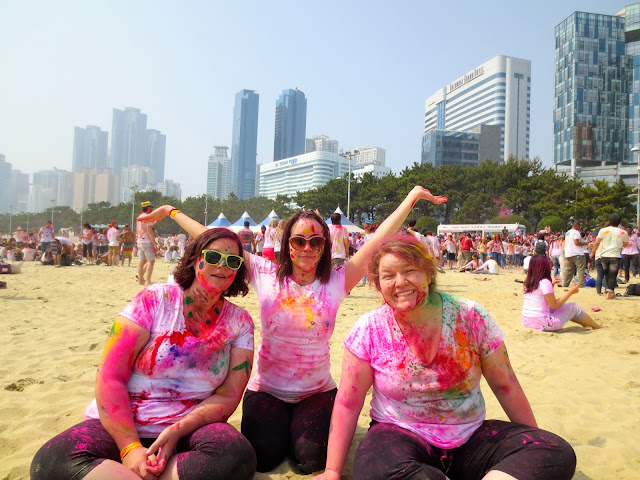 This past weekend I was finally able to tear myself away from Nakhonsawan and take a weekend trip to nearby Sukhothai. The city was once the capital of the Kingdom of Siam (Thailand's former name) during the 13th and 14th centuries. The site houses temples, stupas, and spires that once paid homage to both Hinduism and Buddhism. The city has been influenced by the countries and kingdoms surrounding it, and it has a unique style that is (understandably) labeled Sukhothai style. Stone inscriptions found at the site are also examples of the first Thai writing. The city is a world UNESCO site, so I knew it must be impressive. I was completely blown away by everything there, and would highly recommend a visit if anyone finds themselves in the northern part of Thailand.

Travel here does not mean that a lot of planning needs to be done beforehand. I made the decision that I wanted to go away for the weekend, then proceeded to not book anything ahead of time or look for accommodations. This actually worked out perfectly. I went to the bus station early on Saturday morning, and got a ticket for the next bus leaving for Sukhothai. Then I simply waited for my bus to arrive--there's usually a number on the ticket that corresponds to the bus you should get on. After a two and a half hour journey, I arrived at Sukhothai. When I got off the bus, I was surrounded by tuk tuk drivers trying to get a fare. They tried to overcharge me, and I soon found a songthaew (this is the Thai version of a bus: it's a pickup truck that has benches in the back and a roof that covers it). It was going to the Old City, which is the area I wanted to stay in, and it cost much less than a private tuk tuk or taxi would have cost.

I didn't have any lodgings set up, so I decided to get off the songthaew in the old city whenever the surroundings started to look interesting. When I hopped off, I saw a couple of stupas on one side of the street and found a cheap hostel on the other. It's low season for tourists right now, so I scored my own room (at Old City Guesthouse) with air conditioning for 350 baht (about $12; usually these rooms cost much more). After finding a home base, I decided to go out and explore. There were a few awesome restaurants and coffee shops about a minute's walk away from my room, and I discovered that the Historical Park was about 5 minutes away from there. Pretty astounding that I had found a place so close when I didn't even really know where the Park was.

I spent the next two days renting a bicycle and biking around the city. It only cost about 50 baht (less than $2) to rent a bike for the entire day, and it was 100 baht (about $3) to get into the park. I saw ruins, Buddha statues, Hindu statues, stupas, temples, and ruins galore. It was a nice, relaxing weekend (albeit quite hot; temperatures were typically above 100 degrees).

I took a ton of pictures, and I think that they will do better job of describing the beauty of this place much better than any words can: 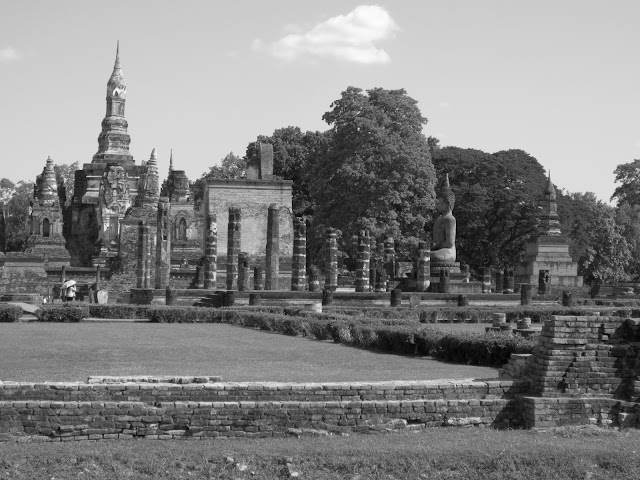 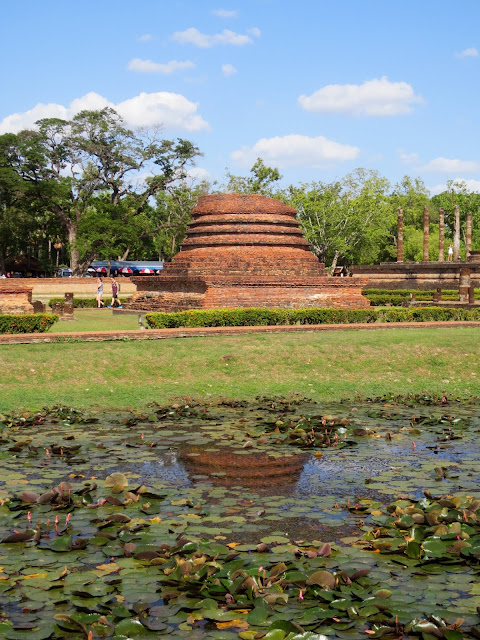 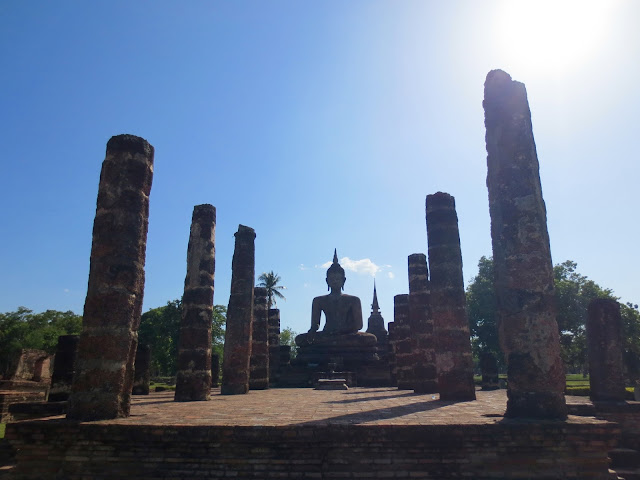 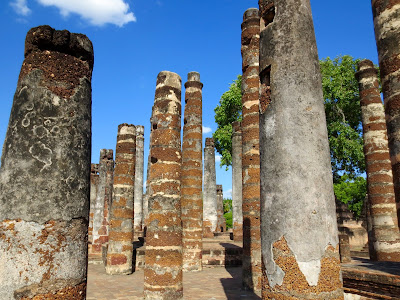 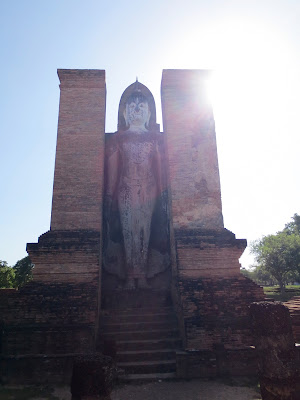 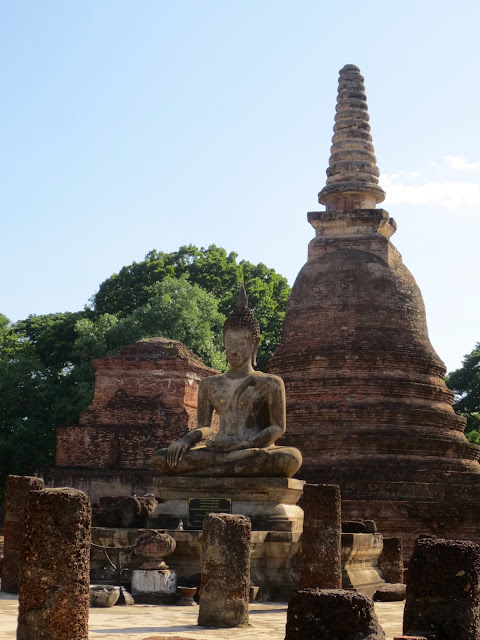 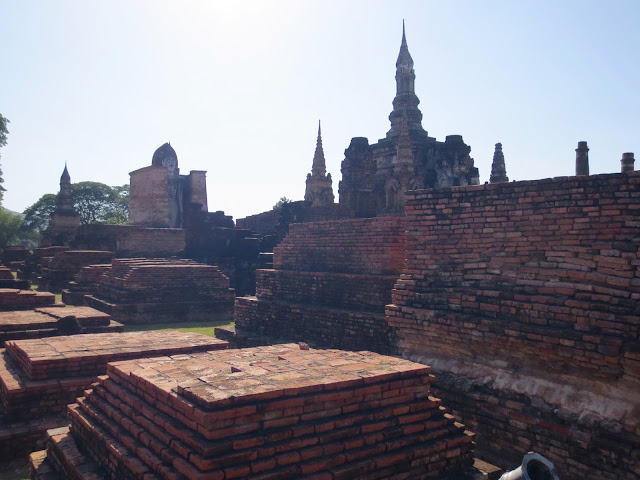 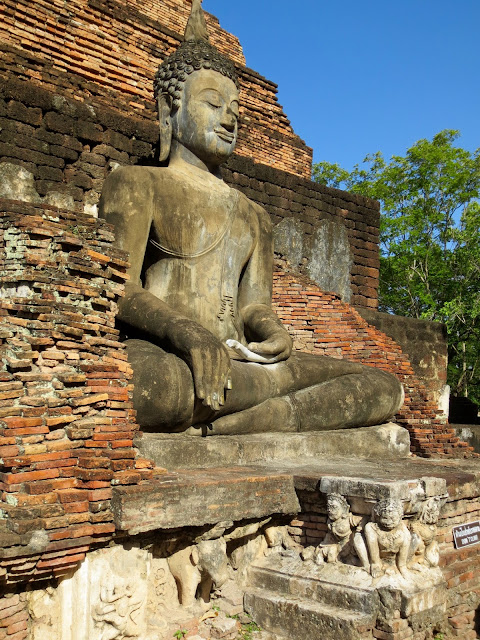 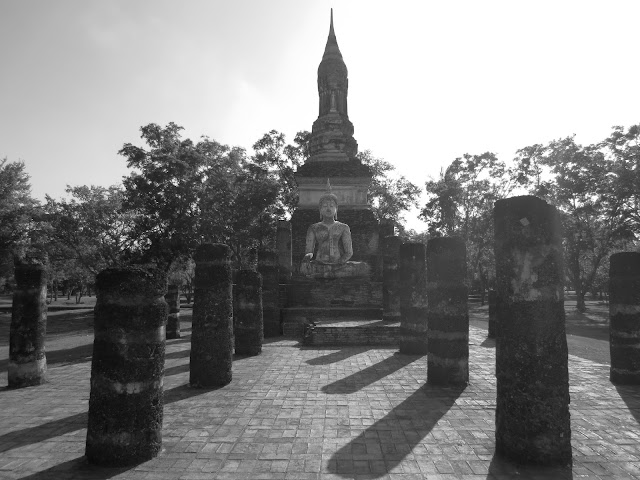 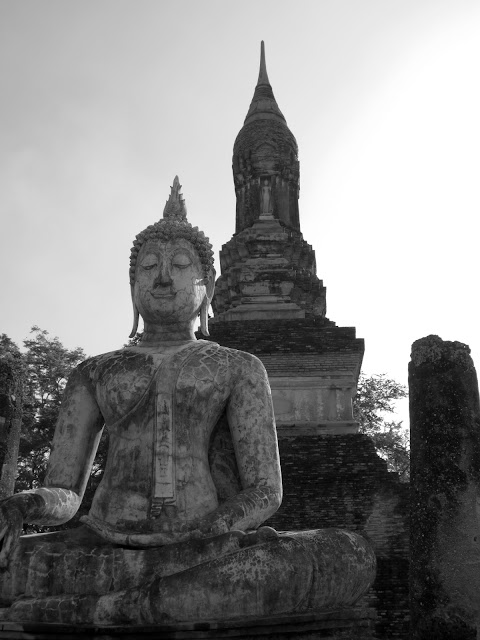 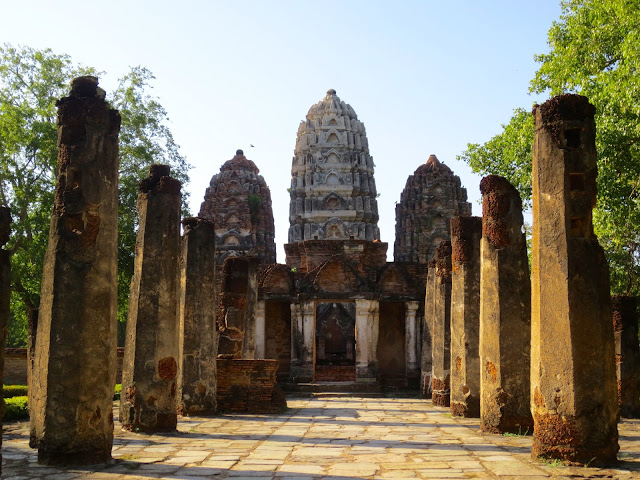 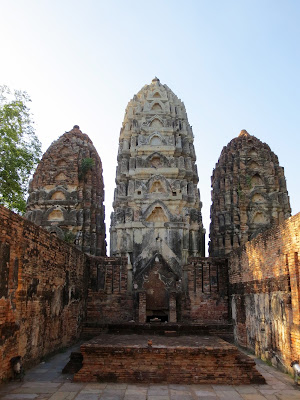 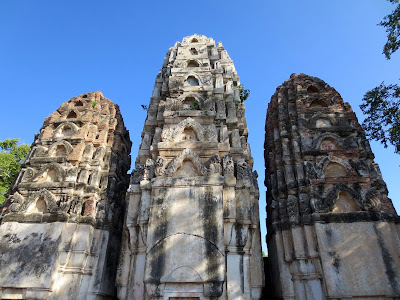 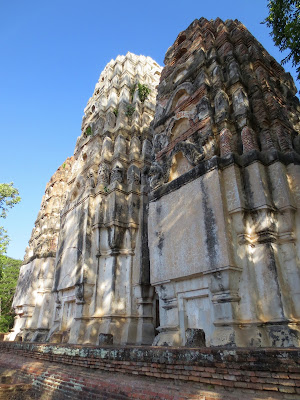 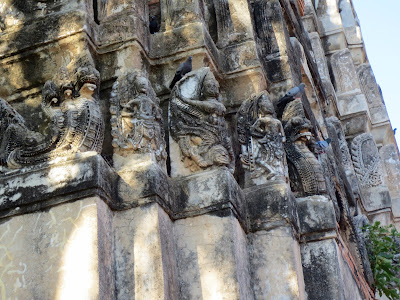 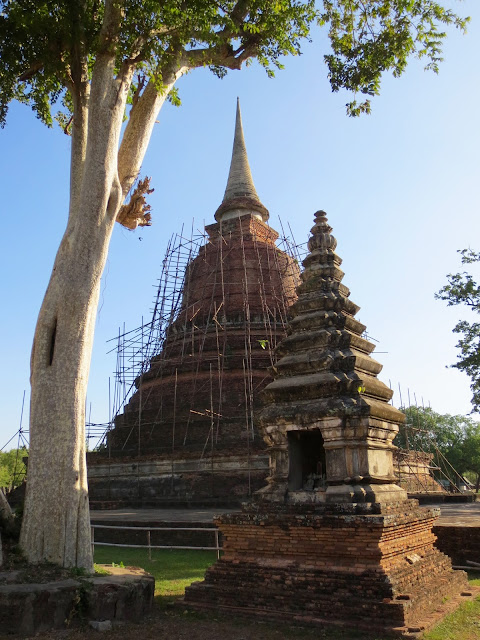 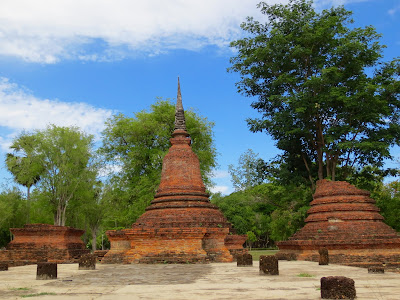 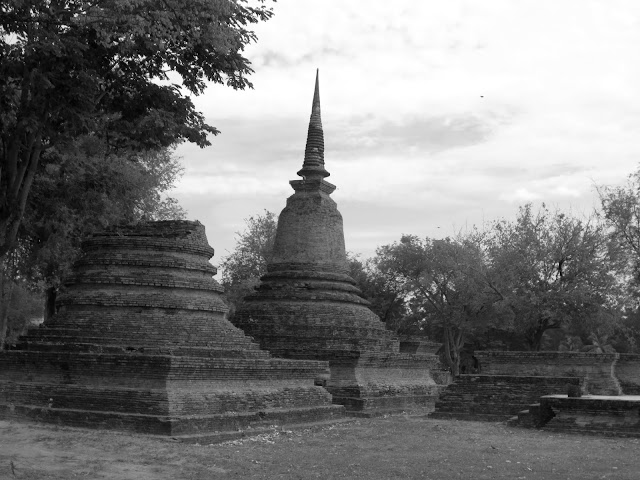 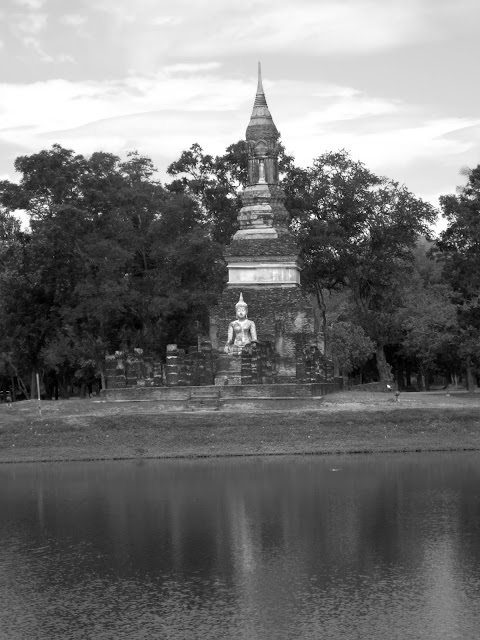 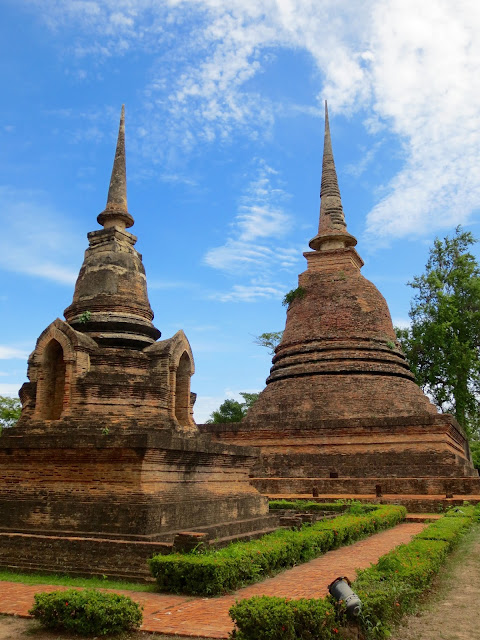 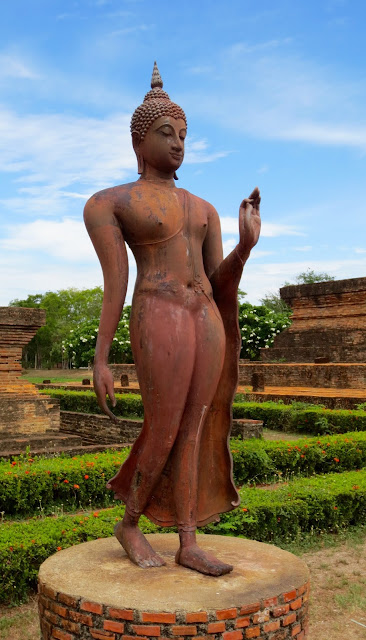 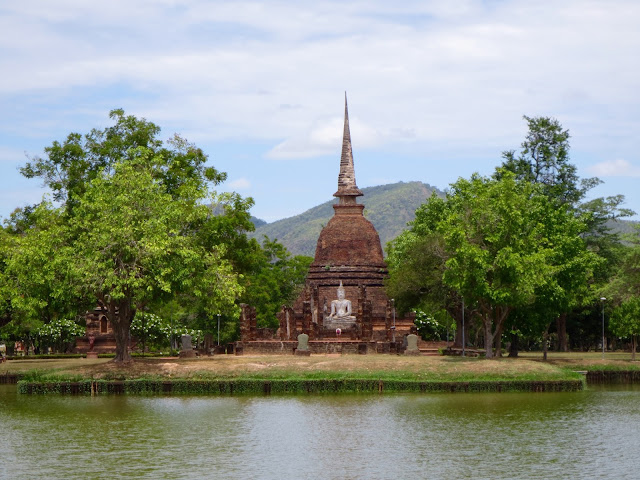 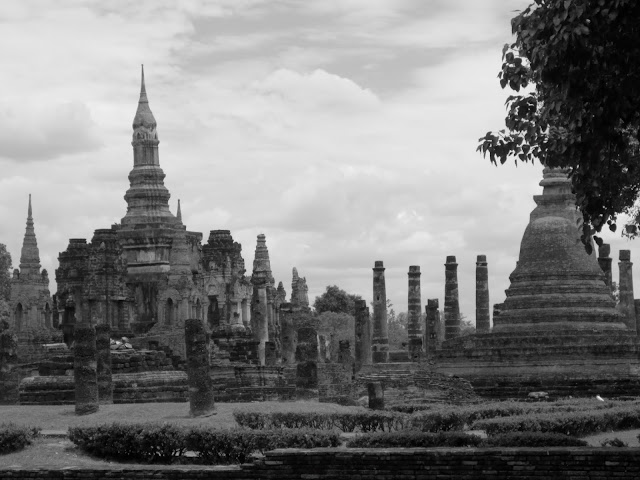 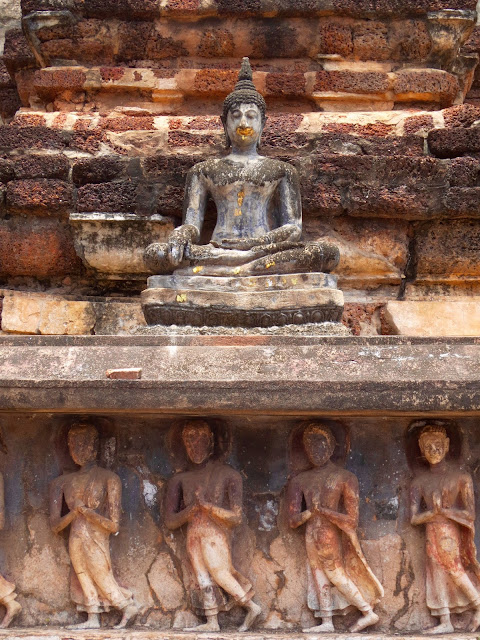 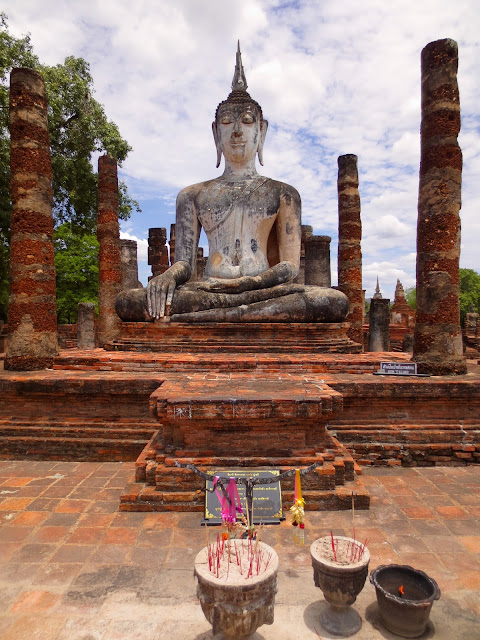