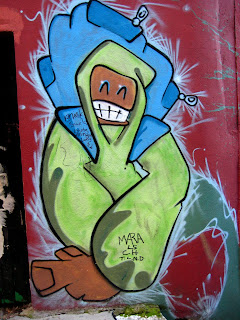 Some graffiti from right by the hostel entrance. It's supposed to be here--it gives the entrance an interesting vibe. 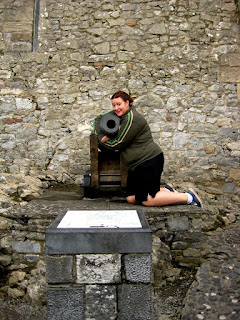 A cannon and I. I love castles. 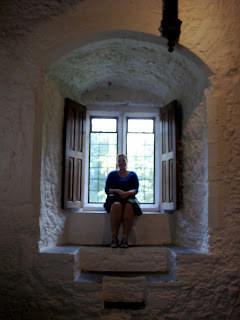 Me in a window seat! 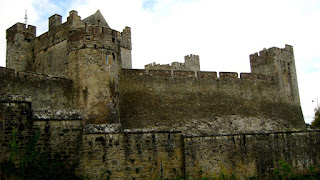 A view of the Galtee Mountains from near the caves.
Today was another interesting day. The person that Maria is staying with, Christian, decided that he wanted to visit the Mitchelstown Caves with us and another friend of his, a Canadian gal named Amy.
We left a little early in the morning because it was about a 45 minute drive to get to the Caves. There was no photography allowed in the caves, so I don't have any pictures, but it was beautiful. According to lore, the caves were discovered by Michael Condon, who was just looking for a crowbar he had lost in a crack while breaking stones for his house. He dug in the rock to find the crowbar, but he discovered the caves--and never recovered the crowbar. There were a lot of towers (such as the Babel Tower which kind of looks like a dragon), "pig's ears" (which are kind of like folds made of calcite), cascades, and the stones were colored in peculiar ways, which made it easy to see different things. There was also a formation that looked like a witch lying down, a one-eyed monster eating a rock, and a gingerbread house.
As we left the caves, some of the fog had cleared up so I got a decent view of the Galtee Mountains.
After this, we had a little extra time so we decided to visit the castle at Cahir. I don't know what it is about castles, but I pretty much love them. There are so many nooks and crannies to explore and there's always such a history attached to them.
After this, Amy, who lives in Cork for now, decided to show me around a bit. We went to some of the major shopping centers so i could get a charger for the international cell phone I borrowed from Emma (I can call people now!). We also stopped at a place called lush, where i bought a shampoo bar (it's extremely lightweight). Then we went to the English Market, which is a hidden grocery area where you can buy meat, cheese, fruits, and vegetables. We ate in a nearby park (where I recognized my first rooks, which are terrifying crow-like birds), then got a pint at An Brog. I tried some Murphy's, which is the drink of choice in Cork, and Bulmer's, which is a cider beer. After this I decided to go back to the hostel and spend the night in so that I could catch up on blogging.
Tomorrow I fly to Dublin then Scotland.
Posted by Unknown at 9/01/2009 05:19:00 PM