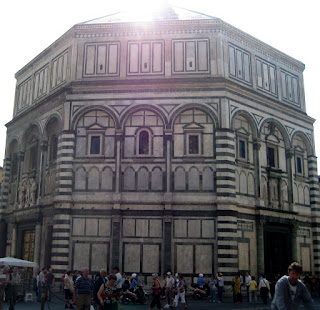 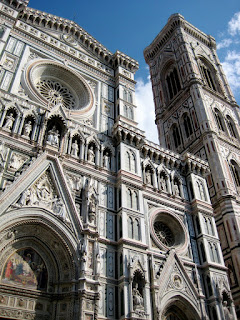 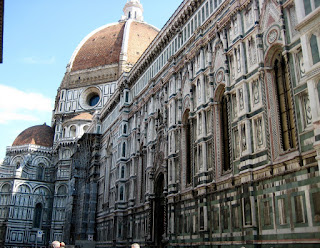 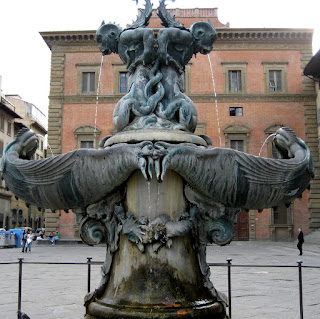 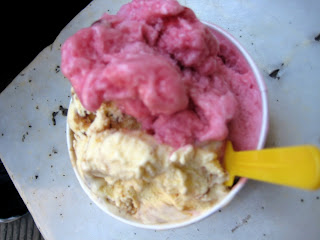 gelato--delicious!
Today was a pretty relaxed day as well.
I spent some time with two Americans for most of the day. They were both quite hungover (while I was not), so although we originally planned to do a day trip to Siena, we ended up staying in Florence.
We did a bit of shopping in the open air market near the train station to start with. I only got a pair of sunglasses (because thankfully, it's hot and sunny here), but there was lots of stuff--shirts, purses, leather jackets--to choose from. After this, we got some pizza and coffee in a nearby shop. It was pretty delicious, and I can understand why people go to Italy in order to try the food.
We went and saw the Basilica de Santa Maria del Fiore, otherwise known as the Duomo, which is basically a giant cathedral. It was massive, and incredibly gorgeous. It's mind-boggling to think how much time, work, and planning went into create such a large structure that is so detailed. I didn't go inside or climb to the top of the tower, but it might be something I do in the next few days.
We just wandered around a bit after this. We walked by the canal, which was gorgeous and had some pretty fantastic-looking bridges, and I sampled gelato for the first time (it's kind of like ice cream, but creamier, and incredibly delicious).
I went back to the hostel for a bit, then went to a nearby park to do some writing. The sky began to look pretty ominous and the lightning got pretty intense, so I went back early and am making it an early night at the hostel. Tomorrow I plan to go to the Palazzo Degli Uffizi pretty early with some people who are studying in Rome, so I'm making it an early night.
Posted by Unknown at 9/19/2009 03:11:00 PM