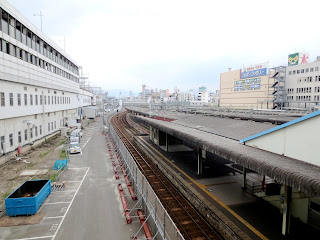 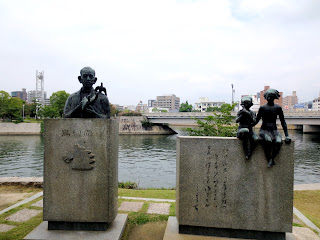 I spontaneously decided to take a day trip to Hiroshima once I learned it was only about two hours away from Kyoto on the fast train. I felt that the history of the atomic bomb would be more interesting than just exploring temples for two days in a row in Kyoto. The park was located by a river, around the husk of the A-Bomb dome. 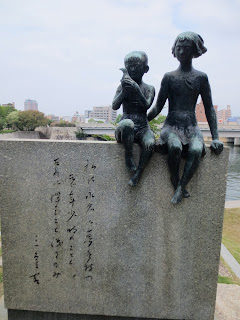 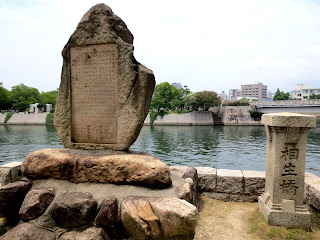 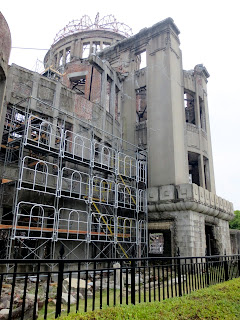 This is the A-bomb Dome. It used to be known as Industrial Promotion Hall, and is the only building to be left standing after the blast. Many people wanted the ruins to be torn down, but it was finally decided that it would remain to remind people of the horrors of the day the bomb was dropped. The park itself is beautiful. It is lush with vegetation, which is a testament to both the resilience of the land and the Japanese people. After the bomb was dropped, it was rumored that nothing would grow for 75 years. That has been proven incorrect, and it is a point of pride. 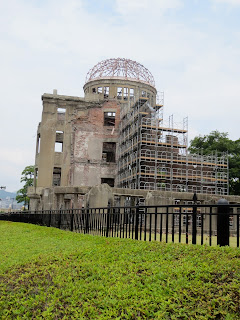 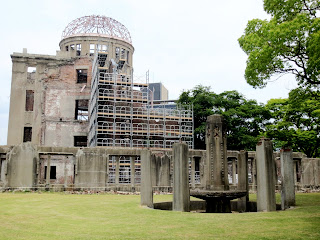 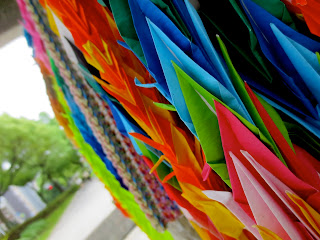 Colorful paper cranes have become a symbol for peace in Hiroshima. Students and citizens around the world ship folded cranes to Hiroshima as a way to promote peace. A lot of them were hung on the Children's Peace Monument, which was constructed to honor children who died as a result of the bombing. The monument itself is of a girl with outstretched arms, holding a paper crane. It was based on Sadako Sasaki, a young girl who died of leukemia due to exposure to radiation. 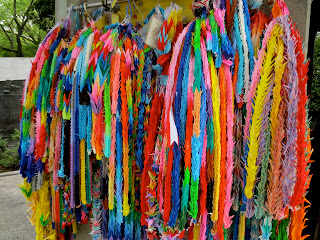 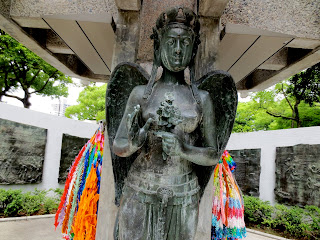 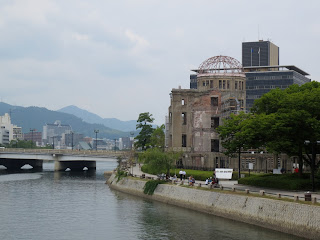 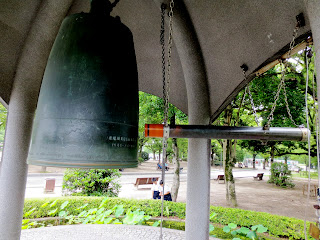 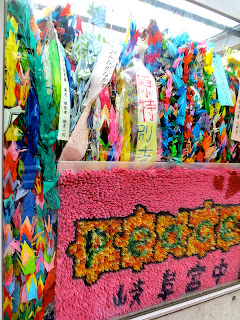 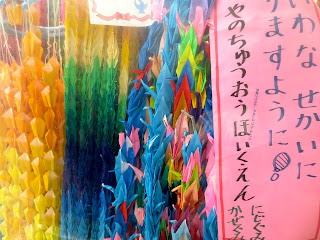 The cenotaph is located in the center of the park, and holds the names of all of the victims of the A-Bomb. If you look through the center, it frames the Peace Flame and A-Bomb Dome. The arch represents a shelter for the souls of the victims. It was one of the first memorials to be built. It carries an epitaph, which means "please rest in peace, for we shall not repeat the evil". There is a special plaque that tries to eliminate any offense people might feel from the phrasing that states, "The inscription on the front panel offers a prayer for the peaceful repose of the victims and a pledge on the behalf of all humanity never to repeat the evil of war. It expresses the spirit of Hiroshima -- enduring grief, transcending hatred, pursuing harmony and prosperity for all, and yearning for genuine, lasting world peace". From everything I saw at the park and the accompanying museum, there is no blame or prejudiced with the monuments; the only motive that is clear is the promotion of world peace. 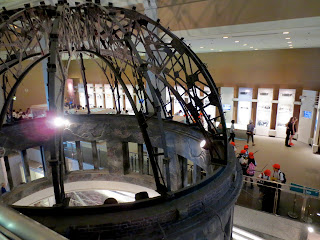 There was also a museum in the Peace Park. It had stunning photographs and stories throughout. The images and information was haunting. 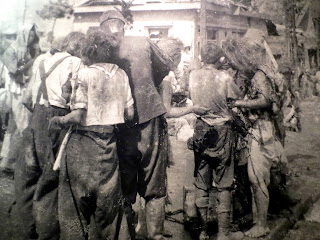 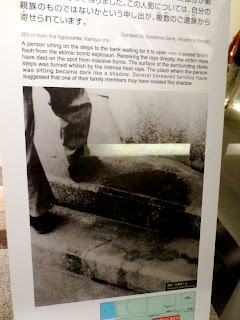 The story of Sadako Sasaki is a very sad, yet interesting one. She was only two when she was exposed to the radiation of the A-Bomb, and she seemed to suffer no ill effects from the bomb. Nine years later, she fell ill and she was diagnosed with leukemia. Many people believe that if one folds 1,000 paper cranes, their wish will be granted. Sadako believed this, and she folded cranes throughout the entire time she was ill thinking it would cure her. The cranes are now one of the core symbols for peace that you can see in the park.

After seeing the park and the A-bomb museum, I journeyed to Hiroshima Castle, aka Rijo Castle, aka  Carp Castle because of the many fish that decorated the roofs. The original castle was completely destroyed by the bomb, but some of it has been rebuilt. Only three trees survived--a eucalyptus, a willow and a holly. These trees are still alive and thriving, and look a little worse for wear. Some stone foundations remain as well. Castles in Japan aren't just one building, but were rather entire villages or towns when shoguns were in power. There are many different buildings and things to see, and this castle was no exception. 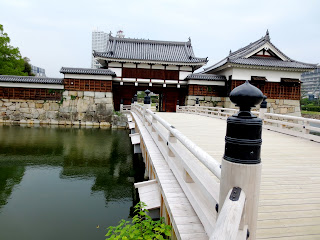 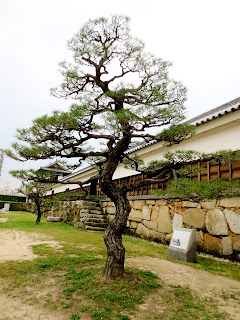 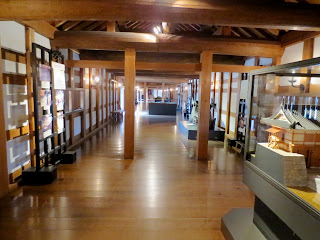 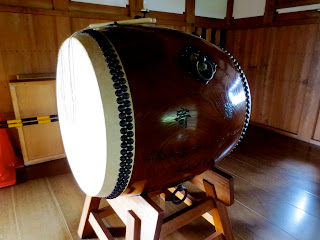 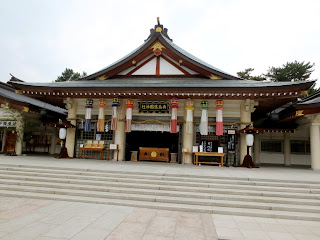 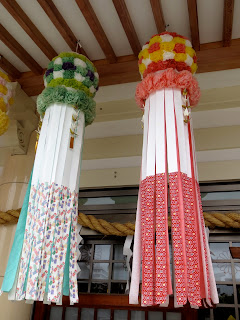 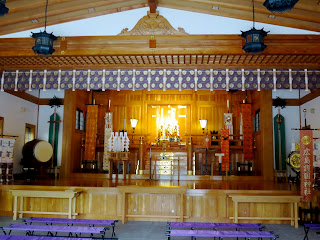 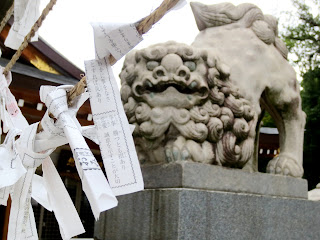 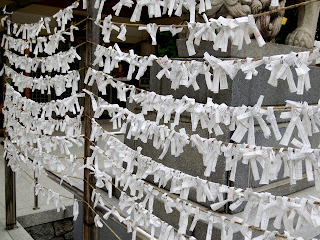 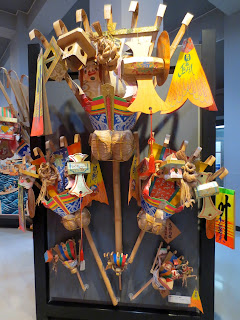