Things in Korea are quite different than things back home in Wisconsin. Here's a list of things that struck me as strange 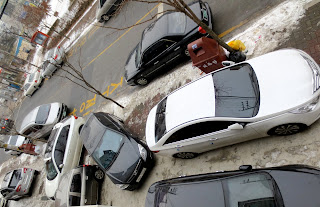 People park everywhere here! On the sidewalk, both ways on each side of the street, and as you can see from the above pictures, they often block each other in. Apparently, every car has a slip of paper int eh front with the driver's phone number, so if a car needs to get out, they can just call the person that is blocking them and that driver will come out and move their car. It's a strange system, but it works!

Limbo can happen any time, any where! I've been at bars at least twice where they just randomly whip out the limbo poles. People love it, and it usually happens when there's a large amount of people in the bar. Almost everyone lines up to go through, and it gets pretty competitive!

3: Doors
I know you might assume that doors cannot be too complicated, but let assure you, you are wrong. There are usually two doors that go into places, and half the time one of them is locked. There are signs saying which one doesn't open, but about half of them are in Korean, of course. This means that there is about a 25% chance that when you are trying to walk into or out of a place, you will smack your face on a door that doesn't open. I think that I have finally learned my lesson from this after almost breaking my nose on a glass door a few times.

There are also sliding doors here that are mystifying if you have never seen them before. I was a few paces behind a lady that had just walked in, and the door had closed by the time I walked up to it. I stood in front of it, waiting for it to open, but it didn't. There was an older lady on the other side, about a foot away, who was staring at me as I confusedly looked at the door, reached to the side to maybe use my Hulk strength to pull it open, and then she stepped forward and hit a magic button that opened the door that was located on the side. I had no choice but to walk in and pass this laughing old woman because to walk away would have been to admit defeat. Sliding doors here don't have motion sensors, they have buttons. Which I did not expect. 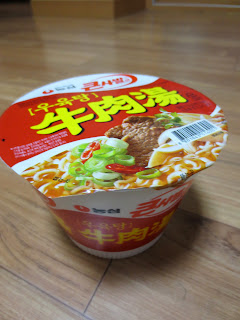 If I were to mention Ramen noodles to someone back home, they would probably immediately thinking of cheap packets of noodles that college students live on. Here it's called Ramyien, and it is still cheap noodles, but it's an absolute staple in the diet of anyone who lives in Korea. They have the plastic wrapped packets of noodles, but they mainly have Ramyien in styrofoam or plastic containers that you can take on the run. Almost all convenience stores have hot water taps, so you can just walk in, pick up a container of Ramyien, add the hot water in the store, and eat as you walk to the next place. You can also ask the clerk for chopsticks if you don't happen to have any at the moment. It's definitely not unusual to see people eating out of these containers on the street. The "flavor" is never in English, so I've always gone by the picture on the front to try to avoid the fish ones, because they are disgusting. Most people have one flavor that they think is absolutely amazing, and they won't touch the other ones unless they're desperate.

5: The crazy schedule of children
Children here are crazy busy. They get up in the morning and go to regular school from about 8-2 during the day. After they have been in school all day, many children have various academies after school or after dinner. There are academies for everything--English, tae kwon do (which is very typical for children to be involved in), math, science, hip hop dance...everything! We have children at the hagwon (the word for private academies) until 8:50 at night, for example. Many of them study with us for 2-3 hours. According to some statistics, it's not unusual for parents to spend over $1,000 per child per month on education. And this is throughout their entire education, from elementary through high school, and then they have to pay for college! Children are so busy studying and going to different academies and everything that they are always exhausted. Some nod off during class. When I ask children where they want to go for vacation, they tell me that they want to stay home and sleep instead of going anywhere! Any child back home that thinks they have too much homework is absolutely wrong, it could be much, much worse!
Posted by Unknown at 1/08/2013 09:47:00 PM