Yesterday (Wednesday for me) was the first snow storm in Korea! It snowed a tiny bit last week, but this was the first time that it actually stuck. It snowed very hard the entire, we probably got about four inches, maybe six? I'm really not the best judge, but it was enough for my school to get cancelled! 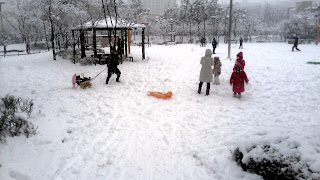 I work at a hagwon, or private school, so while my school was cancelled, most of the public schools were not. I did not know that school was cancelled until after I was already there, so I was able to take a stroll while it was snowing the hardest. By the time I finally arrived at school, I was completely covered with snow. I'm pretty sure there was a two inch layer of it on top of my hat! Public school lets out at about two in the afternoon (or sometime in the early afternoon), so it was fun to see the children playing in the parks.