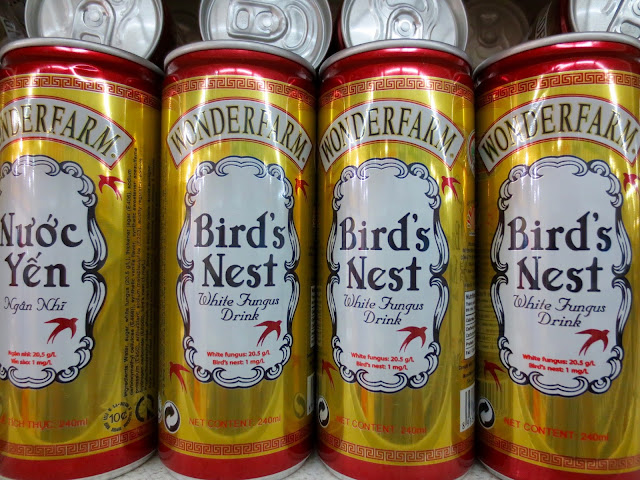 This is one thing I will absolutely NOT be drinking any time soon: Bird's Nest Soda.
If you can't see the picture, it is advertised as a "white fungus drink" that is 20.5 g/L white fungus, and 1 mg/L bird's nest.

Edible bird's nests are kind of a thing here in Asia because they are very rare.
It's called "the caviar of the East."
Andrew Zimmerman, a man known for trying strange foods, is apparently a fan: "I love nests harvested near the ocean. They offer a sea-salty, briny flavor (the birds eat primarily saltwater fish, the nests are full of their saliva, spewdom, and droppings. It only makes sense that the nests would taste of the sea!)

You can find little jars of them in many grocery stores, and it is seen as a luxury item.  It is usually served as a thick soup in countries like Hong Kong, and this is the first I have ever heard of it being available in liquid form. Apparently the cost of just one bowl of bird's nest soup costs anywhere from $30-100 in Hong Kong.

Not every kind of bird's nest is edible -- the ones sold for consumption are created by swiftlets using solidified saliva. That's right people, some pay big bucks to ingest bird spit. According to those that regularly ingest this product, they do so because it has a high nutritional value and great taste. I've tried some weird things in my day, but I think I'll pass on this one despite the rave reviews.