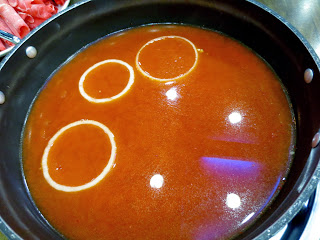 Korea has a plethora of amazing culinary delights, and one that I have heard about many times but never had was shabu-shabu. Luckily, I was able to gather a few friends and partake in a delicious meal.

Shabu-shabu is a Japanese dish, which is essentially a hot pot with thinly-sliced beef. The dish has gained this moniker because of the sound made when the ingredients are stirred in the pot.

You can order either beef or seafood for this dish, and we opted for beef. The servers bring out this massive pot filled with broth, a plate of rolled, thinly-sliced beef, vegetables, rice, noodles, and a few small side dishes like kimchi (of course!). The pot is set above a flame, where it is heated to boiling. Then someone at the table cuts the vegetables (with the scissors that is on the table at every Korean meal), going vertically up the platter so they get a bit of everything. We let those cook for a a little bit, then threw in some of the beef. It was so thinly sliced that it cooked almost instantly! After that, we were set to start eating. As we ate the soup, a server would come over with a giant pot filled with broth and add a bit more.


At the end, the leftover broth is mixed with a rice/egg/vegetable mixture in the picture below to make congee, or rice porridge. It tasted like fried rice -- nothing spectacular, but a nice thing to end the meal with. 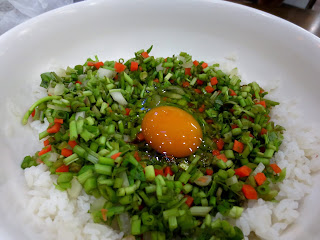 I'm leaving Korea in a month, and already the question "What will you miss the most?" has been cropping up. Without any doubt, I can say that I will miss the food -- not just the taste, but the way in which meals are constructed. Having dinner at a restaurant in Korea is a group activity. The grill is in the middle of the table, so the group is responsible for grilling and cutting the meat, beer and soju distribution, and the many side dishes are shared by everyone. It's almost impossible to not feel a bit closer to your dinner companions after a Korean dinner, and I will miss this instant comradery.
Posted by Unknown at 11/02/2013 01:19:00 AM