For those of you not up on your Korean holidays, last week was Chuseok. We had three days off of work for the national holiday, so I had five full days free of work. My vacation was absolutely amazing. Words can't describe how utterly breathtaking the island is or how fun the people I met there were.

First, a little history on Chuseok. This is basically the Korean version of Thanksgiving with a few key differences. Instead of filling their faces with turkey, mashed potatoes, and stuffing, Koreans eat songpyeon, hangwa, and meat. Songpyeon is a traditional rice cakes stuffed with things like sesame seeds, black beans, mung beans, cinnamon, pine nut, walnut, chestnut, or honey. They are eaten under the full moon to wish for a brighter future. I was lucky enough to try them when the lady who owns the coffee shop I go to every day gave me some stuffed with sesame. They were actually pretty tasty. Chuseok is also a time to honor your ancestors with a right called charye, which is meant to return the favors of past generations and honor them. Koreans believe their spirits are still alive and protecting the family, so they prepare special foods for them and perform maintenance on their grave sites.

Okay, sorry about the history lesson -- on to more fun parts! Jeju is a famous and incredibly popular destination for several reasons. The most traveled airline route in the world is from Seoul to Jeju. It features three UNESCO World Heritage Sites, two of which we visited. It is famous for the gamgyul it produces, which is a fruit similar to a Mandarin orange or tangerine. There is orange-flavored everything -- ice cream, makgeolli, and chocolates, to name a few. It has also been named one of the New Seven Wonders of Nature in a worldwide poll. 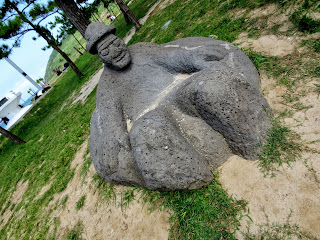 The island is dotted with grandfather statues, called dol hareubang. They are carved from blocks of basalt. They are thought to be gods, and are meant to offer protection and fertility. They are located at entrances for protection against demons traveling between realities. 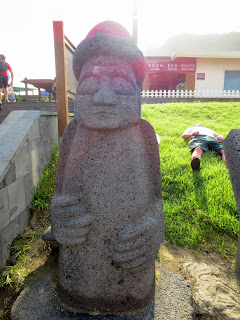 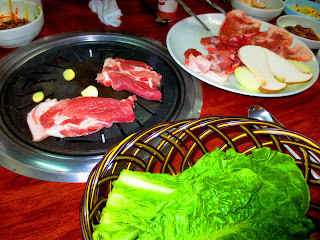 The black pig dinner happened our first night on the island. We went to sleep pretty early that night because the next day we were going on a tour of the island. 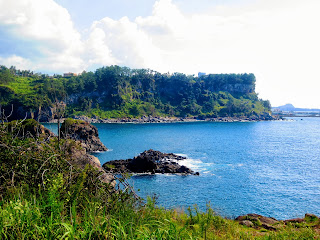 Our first stop on the tour of the southwest part of the island was Jeju Olle Trail. This is simply a long distance footpath that mainly follows the coastline. There are 21 main courses, 5 major spurs, and lead to a fantastic natural rock pool that we swam in to cool off and wake up. The pool was a nice temperature, and had a nice cliff you could climb up to and jump off. It was a pretty fantastic to wake up and shake off last night's festivities. 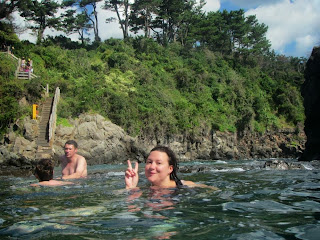 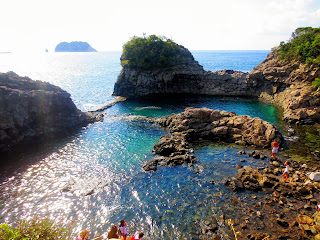 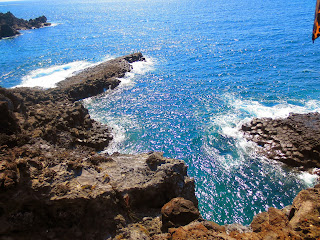 After the Olle Trail, we went to see Jusangjeolli Cliff. These rocks are an amazing volcanic rock formation off the southern coast. They are rock pillars that formed during the volcanic eruption of Mount Hallasan into the sea. The pillars are shaped like cubes or hexagons, and their shape is so perfect it looks like they were carved. They were beautiful to look at, especially when the waves were crashing down. I have heard from a credible Irish source that they look a lot like the Giant's Causeway in Northern Ireland. 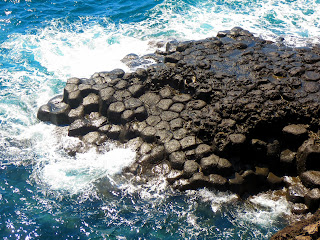 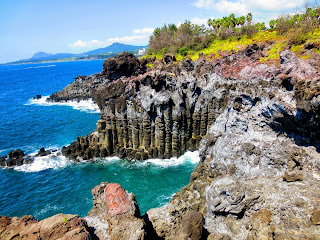 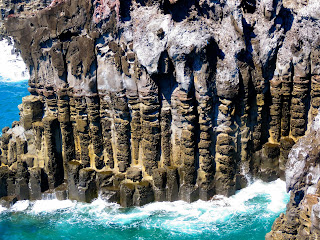 At this point, it was only about noon, but we had many more things to see. We headed to the Cheonjeyon and Jeongbang waterfalls. I'm pretty sure that this was the first time to see a real, proper waterfall so I was very nerdily excited. I didn't have the chance to get very close, but the waterfalls were beautiful. I think the more impressive thing was the turquoise pool. It was beautiful, surrounded by cliffs. No swimming was allowed because the water can get so cold it might stop your heart. We may have disregarded the signs and gone in anyway, until some Koreans with whistles started yelling at us. 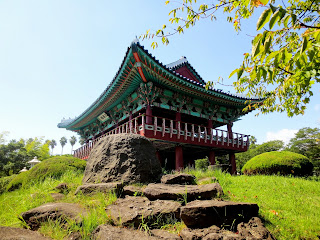 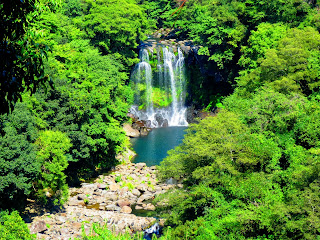 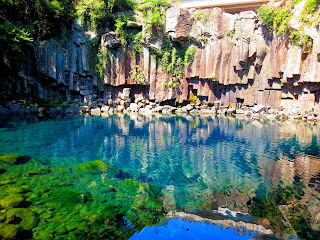 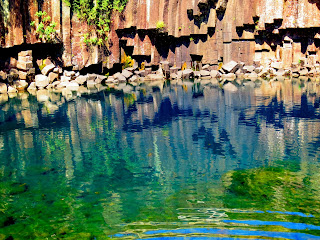 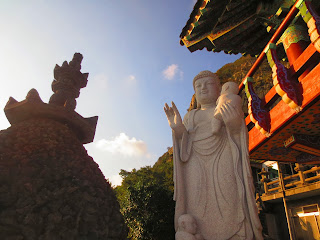 After checking out the waterfalls, we went swimming at Jungmun Beach, one of the most famous beaches on Jeju Island. We entertained ourselves by leaping into the waves for a bit then soaking up the sun. After the beach, we headed to San Bang San Temple. At the top of about a million steps at this place, you came to a place where water was dripping from the roof of the cave. As it drips, it is blessed by a monk. People come here and drink the water, which apparently cleanses the body. The temple was beautiful, and it had a giant golden Buddha. Check out the pictures of this place below! 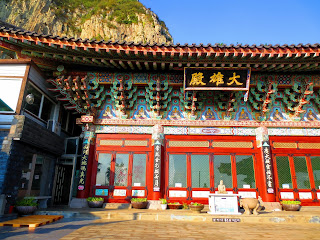 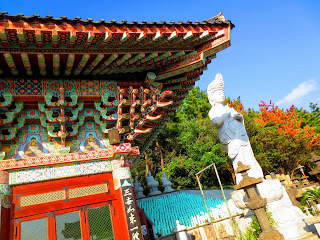 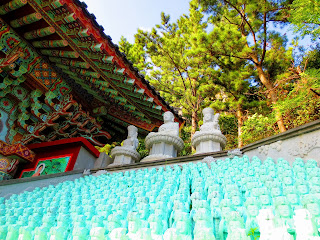 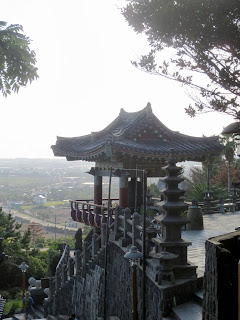 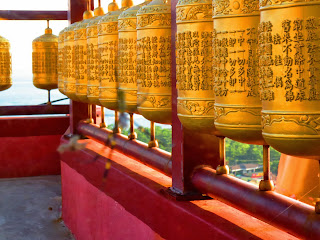 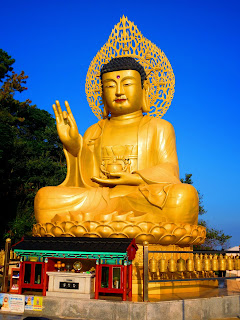 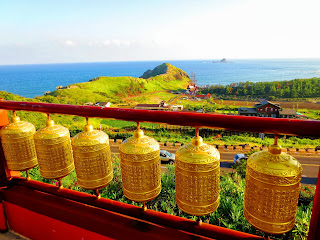 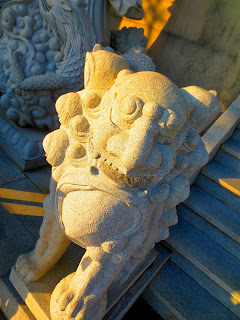 This is only from a day and a half of my Chuseok adventure. More blogs to come, showing you more of the pristine beauty this island had to offer and why my vacation was one of the absolute best ever.
Posted by Unknown at 9/24/2013 08:35:00 PM