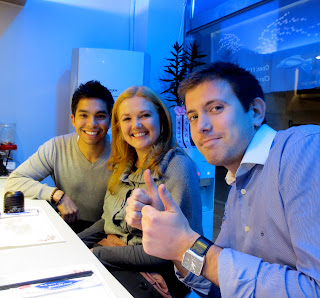 I realized that I haven't done a post on food in quite a while, so here is one that features some of the best sushi that I have ever eaten.

The restaurant is only a few blocks from my apartment in Byeongjeom. It's owned by a very hard-working Japanese man that is extremely friendly and talented.

Friday night after work, I met up with my friends Esteban, Zelri, and George (in the picture on the left). We had pleasant conversation and ate a great dinner. 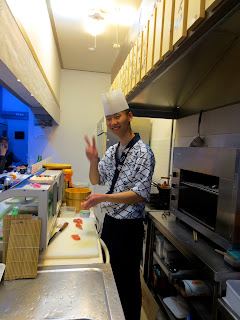 This is our fantastic, hard-working sushi chef. He runs the place by himself, which means he works at least 14 hours a day and does all of the cooking, preparation, cleaning, and other business duties. Despite this rough work schedule, he is always very kind and friendly, as well as more than willing to answer any questions his customers might have.  He studied the craft of creating sushi for several years in Japan, and is an extremely skilled chef. He is also very kind in that he just keeps serving you sushi until you tell him that you're full. And it's a heck of a bargain--you pay about $12 and get unlimited, high-quality sushi. I love this place.

This gentleman specializes in nigiri sushi. This is a Japanese sushi is made with sushi rice and fresh fish. The sushi rice is hand formed into a small clump, and the fish is sliced and pressed on top of it. Nigiri sushi is commonly called two kinds sushi because it involves two ingredients:  sushi rice and a single topping. The topping is also known as neta, and usually takes the form of a type of seafood such as tuna, eel, haddock, shad, snapper, octopus, or shrimp. Depending on the type of fish, it may be served raw in thin slices, grilled, or batter fried. Because the fish is clearly on display, and often served raw, cooks select fish of the highest quality and cut it meticulously so that it is aesthetically pleasing and healthy to it.

It's served with a variety of sides and condiments. Condiments available included wasabi, soy sauce, pickled ginger and some gim (seaweed papers). I usually avoid the pickled ginger and only eat gim with a side of rice, so I only used wasabi mixed with soy sauce to spice things up a bit.  We started off with a fish broth soup. 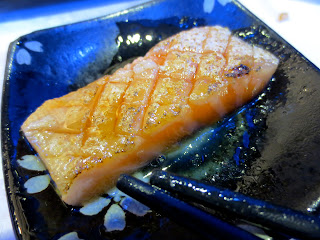 After all this, we were finally full. We told our talented chef that we couldn't possibly eat any more, but he gave us this one last item. It was a perfect end to the meal, salmon that had a slightly sweet sauce on it and lightly grilled with a blow torch.

It was a really great dinner, with fun conversation with friends and delicious food. I'm glad we could get together!
Posted by Unknown at 4/13/2013 11:22:00 PM