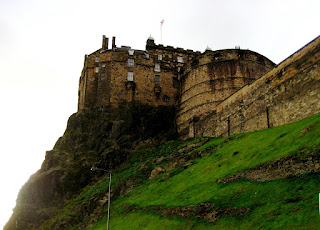 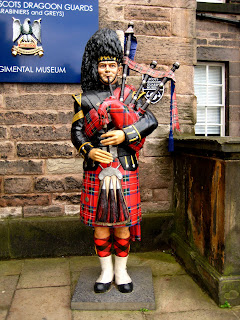 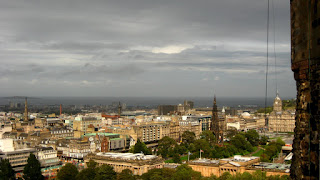 view from the top of Edinburgh Castle 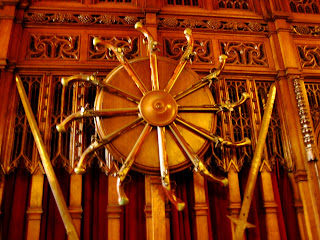 decoration in the Banquet Hall
Edinburgh's a pretty small town, and I traveled to pretty much the same area Saturday as I did on Friday. This time, though I stopped at the National Gallery and went into Edinburgh Castle.
The National Gallery is a museum that deals a lot with Scottish history. The museum was really interactive, and had a three-story portion called the "Discovery Center" where you could learn do different wacky science experiments and learn about stuff that way. One of the main sections of this focused on robots. I had one robot spell out my name with wood blocks that it picked up and put in a little holder. At another point, I tested my reflexes against a robot's by hitting a light as soon as I saw it light up--needless to say, the robot won. I also got to see Dolly, the first mammal who was ever cloned.
After this, I checked out Edinburgh Castle. It was extremely large, and very well kept up so it was nice to look around. There was a lot of history in the castle, and it gave a great view of the city because it's way high up on a volcanic crag. I'm pretty sure that when I got to the top part of the castle, I swear I saw some snowflakes. It was freezing, and I'm pretty sure it couldn't have been more than 40 degrees out at the most.
After I walked a bit more of the Iron Mile, I went back to the hostel and packed up my stuff. Then I went out to dinner and had a few relaxing glasses of wine and pasta for a pretty inexpensive price.
Posted by Unknown at 9/07/2009 03:46:00 PM