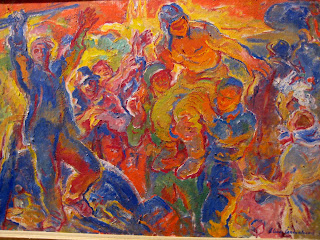 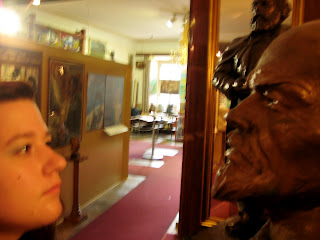 Me and Karl Marx--we're pretty good friends, I guess. He's a little serious for me, though. 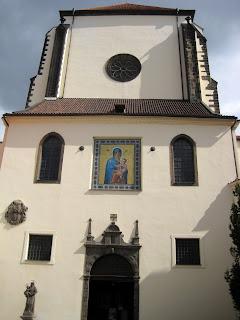 Our Lady of the Snow

statue in front of Our Lady of the Snow 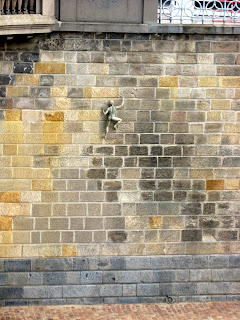 picture of the wall by the Vltava River--if you look closely, you can see the statue of a man scaling the wall
So, today was just a bit of wandering for me. Last night I met some new people from Sweden--Anna, Bjorn, Henrik, and Axel, so we went exploring a little bit then.
I went to the Museum of Communism, which had a lot of details about the history of the communist movement in Prague. It's startling to see how much the people were repressed, yet there's so much art and beauty that comes from the Czech people.
I also found a church called Our Lady of the Snow. According to legend, the Saint Mary came to the person who founded it in a dream. She told him to build a church on the hill that still has snow. Apparently this was during a hot summer, so he didn't expect to find the thing he dreamt of, but he did, and he built the church there. It's hidden next to a square called the Franciscan Gardens and behind a lot of tall buildings, in the middle of a courtyard that has an entrance that looks like it's going into a building, so it took me over an hour of wandering in a circle to find it.
It's extremely easy to get lost in Prague--the streets aren't in a grid system at all, they go in loops and circles and stop abruptly to become another street without warning. But apparently I get lost a lot and go to the same place, so it's been easier to navigate lately.
Posted by Unknown at 9/13/2009 03:33:00 PM