One of the first things that I did in Yangon was take a ride on the circle train (200 kyat). That's right, it's just a train. That goes in a circle. And I sat on it, on purpose, for three hours that it took to complete said circle. It might sounds strange, but the circular train is an excellent inexpensive way to get a look into the lives of local people who live in and just outside the city of Yangon. It's a great way to escape the chaos that is Yangon and take a look at a more peaceful, everyday experience.

I walked from downtown the train station, which is housed in a beautiful, immense old art deco building. Myanmar was colonized by the British from 1824 to 1948. Walking in, I was greeted by a ticket counter covered in Burmese writing and numbers, which was a bit confusing. If you want to buy a ticket, walk into the train station, disregarding the first booth you see. You have to walk up a staircase to get to platforms 6/7, which is where you will find the ticket booth. Tickets are only 200 kyat (less than 20 cents), and trains typically leave every 45 minutes to an hour. 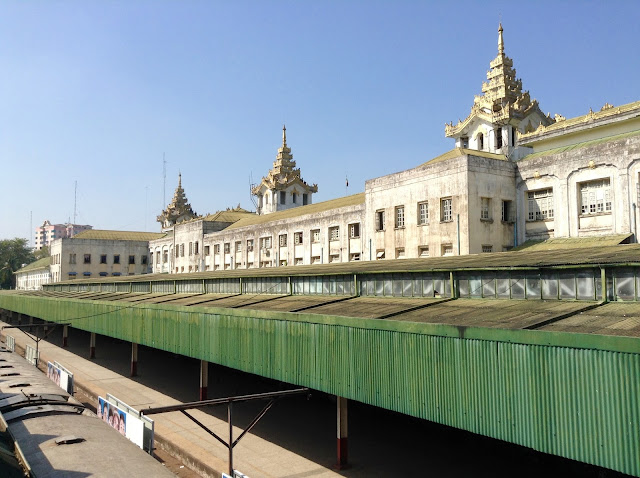 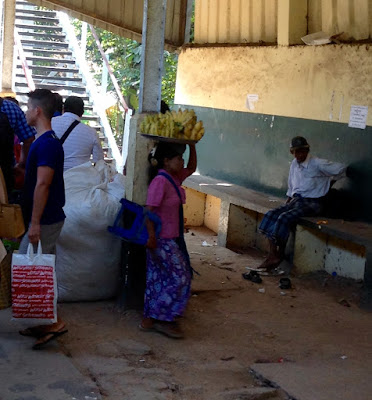 The train ride was beautiful. The train itself was a bit old, but well-maintained. The journey was punctuated by a continual click-clack of the railroad tracks. There are 39 stops along the 29-mile journey, and the train only fully stops for a minute or two between each one. (I saw more than one person that had to jump on after it started moving away). Lots of locals hopped on for just a stop or two, many of them to try and sell their wares to the passengers. In the picture to the left, this lady had just hopped off the train after selling bananas for just a stop. There were markets and little teahouses at pretty much every stop. The circle train ticket allows the passenger to hop on and off at will, so feel free to stop at random places every now and again! 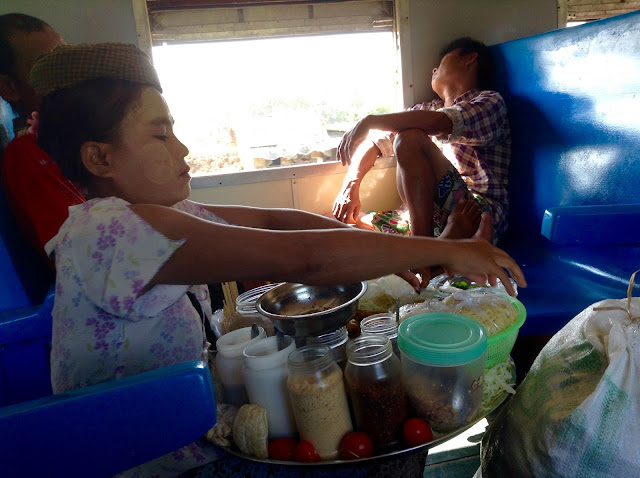 The above picture is one of my favorites from my trip to Myanmar. Many of the people that boarded the train for a stop or two were selling food, and I was absolutely astounded to find that this lady would make you a bowl of noodles to feast on during your journey! She had everything necessary all on this one tray, which she carried on and off the train on her head. The jars held noodles, different sauces, and fresh vegetables like tomatoes and lime. If you look at her face, you'll notice that she seems to be wearing gold makeup. This is thanaka, a gold paste made from ground tree bark. It's uniquely Burmese, and it seemed like every woman was adorned with some iteration of these gold circles that serve as both sun protection and makeup. 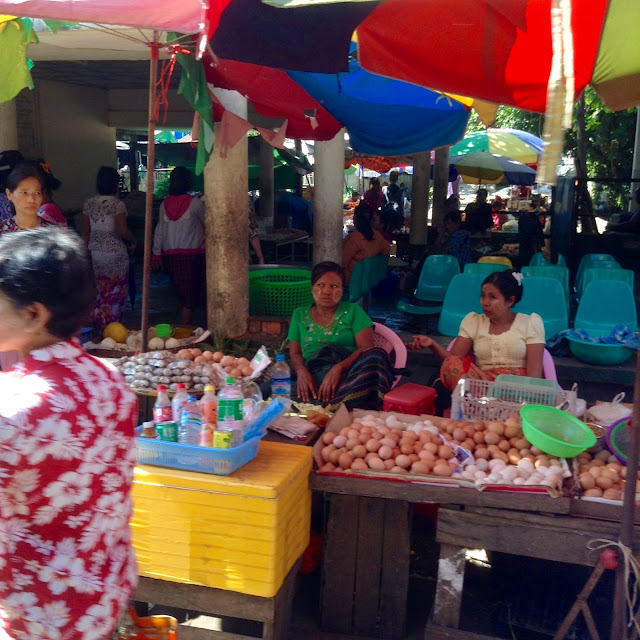 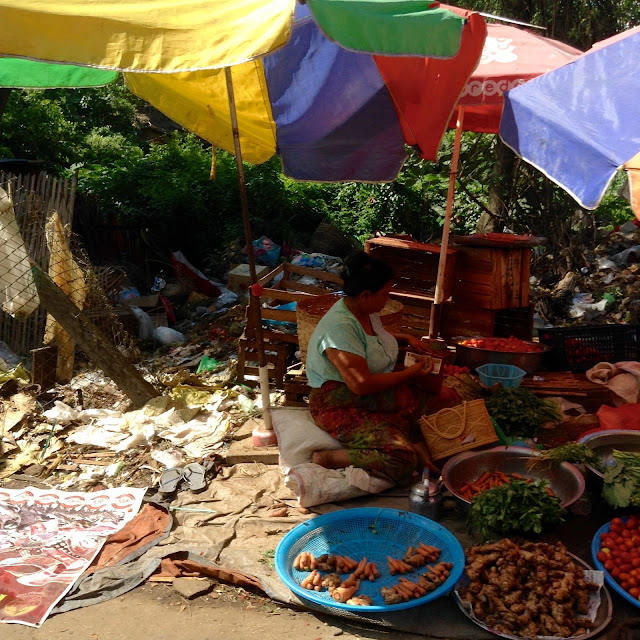 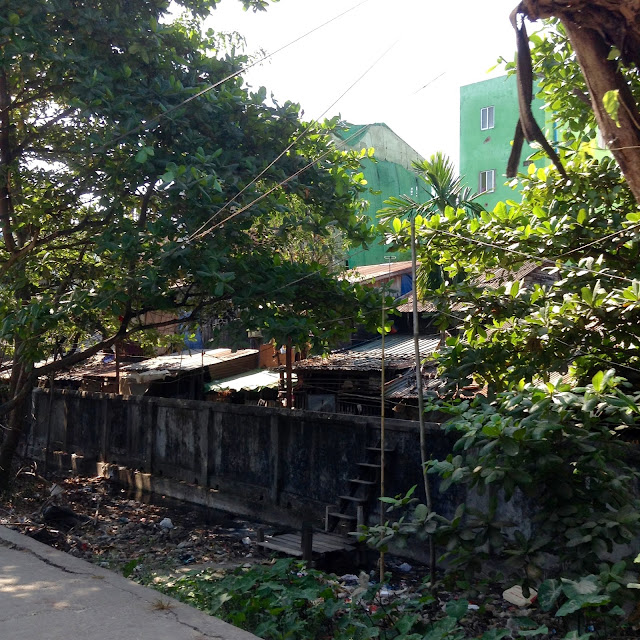 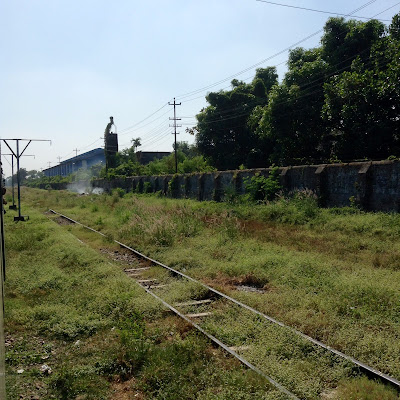 Another part of the journey that I particularly enjoyed was the opportunity to take in the countryside. While traveling, I often find myself only exploring cities because this is where most attractions are concentrated. Driving through the country, I saw plenty of green spaces, lush jungles, rice paddies, and wandering chickens. Although I didn't really hop off and explore, I enjoyed being able to see the greener, less populated parts of Burma on my journey. 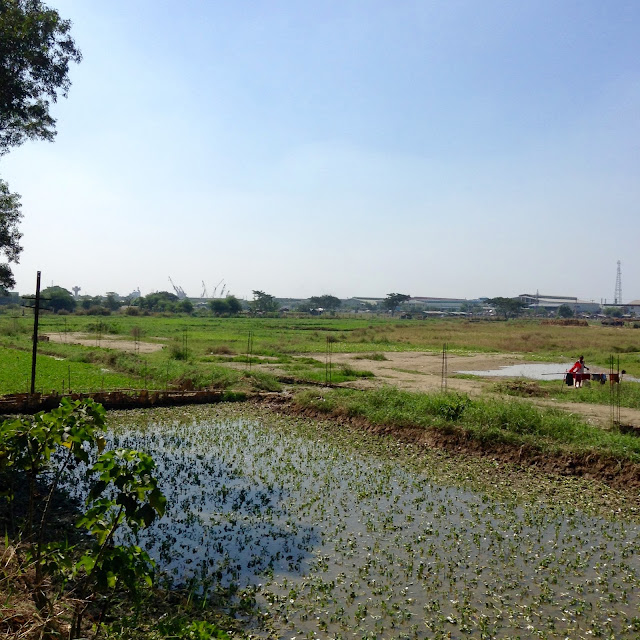 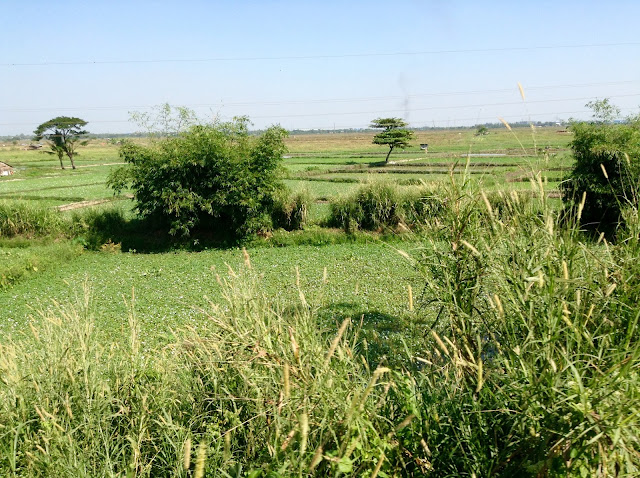 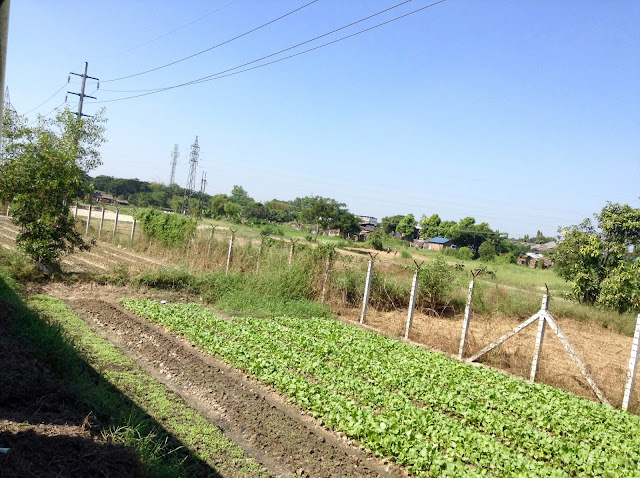 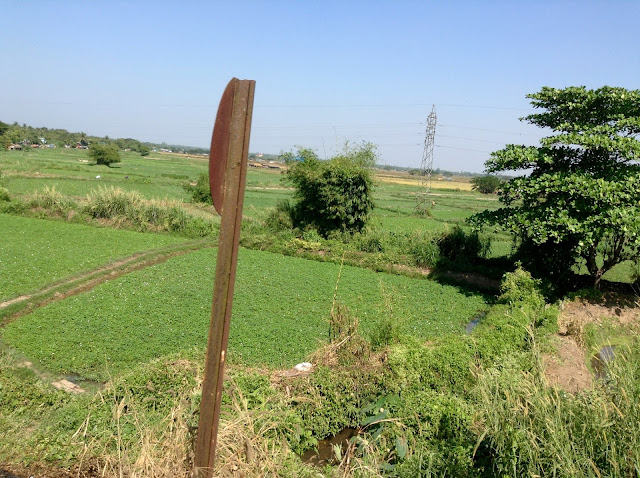