Hello everyone! I know it's been quite a while since I posted -- December has been a crazy month with traveling to Myanmar (also known as Burma), celebrating Christmas (more than once), and celebrating the new year. 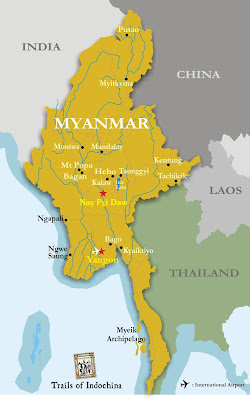 By a stroke of luck, I had 10 days free from work in December because our city was hosting a nationwide Sports Week. I chose to travel to one of the few countries in SE Asia that I haven't been to yet -- Myanmar. It's not a well-known country, but it's increasingly on the radar for many travelers because of its natural beauty and unique culture. It's located right next door to Thailand, so I didn't have far to go. The entire country was closed to tourists for nearly 60 years, and opened its doors just a few years ago. As more people visit the country, things are quickly changing. Tourists bring money, which also means changes that are not always good: more restaurants geared toward tourists, vendors selling souvenirs at every tourist destination, people begging for cash just because you're white, and aggressive taxi drivers. That being said, I loved my time in Myanmar. I had a lot of great moments, and a few unpleasant ones as well. There is always some good and some bad while traveling, but it's always a learning experience!

Traveling throughout the country, I visited the typical tourist sites: Yangon, Inle Lake, Bagan, and the new capital city of Mandalay. I greatly enjoyed my time in the country, but got off to a bit of a rough start. I flew into Yangon, which is the southernmost city I visited.

I'll be honest: Yangon is not my favorite. I had a rough beginning 24 hours in the country. I started by trying to haggle with one of the cab drivers for the hour-long drive from the airport into the city to my hostel. Sadly, they were not open to giving me a deal (which is pretty unusual; cabs that run by agreed prices rather than a meter are usually open to negotiations). The drive into the city was a bit terrifying -- there was so much traffic and people were trying to merge into two small lanes in eight different ways. Luckily, the driver got me to my destination safely (but with a bit of muttering about how he needs to start charging more haha).

After I checked into my hotel, I went in search of food. I asked for a recommendation from the front desk, and they sent me to an American style restaurant, which was a bit strange. I certainly did not travel to Myanmar to eat a burger! I walked past the place, and decided to find something a bit more Burmese. I tried to order some street food, but not knowing the names of any kinds of food made it a bit difficult. The first place I tried was a bust. I walked up to a street vendor, and tried to mime that I wanted the same thing she was currently making for a customer to no avail. She spoke no English, so she just looked at me with big, terrified eyes. She tried to flag down a random person on the street to help interpret, but he got distracted by talking to another person. Then she tried to get a guy that was playing on his phone to help. He looked at her, then looked at me, said "no" and continued playing on his phone. Complete rejection.

After this little failure, I was a bit discouraged. But I walked a bit more and saw a place with the names of beers written in English and pictures on their menu, so I sat down at a table. They had no problem helping me, and I had a delicious curry and a beer for dinner. Finally, success! After this I went back to the hotel and got some much-needed shuteye.

The next morning I was off and headed to Mahabandoola Garden. 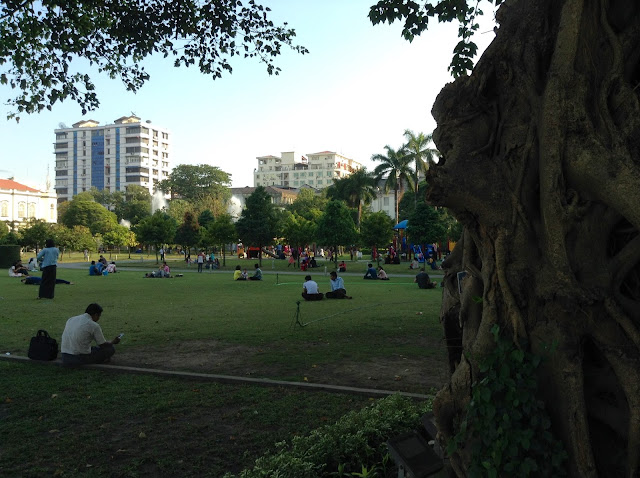 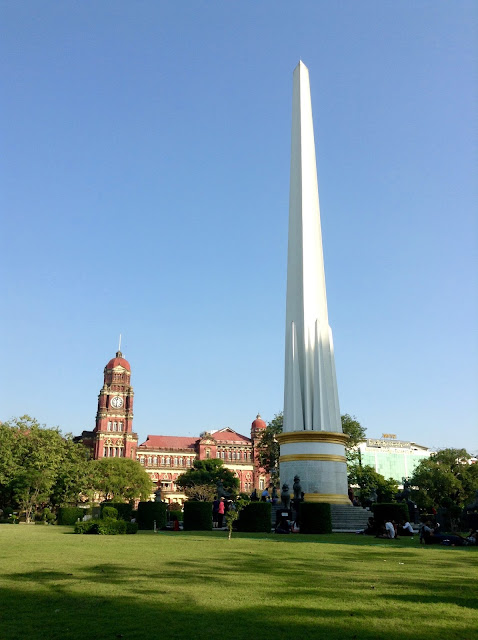 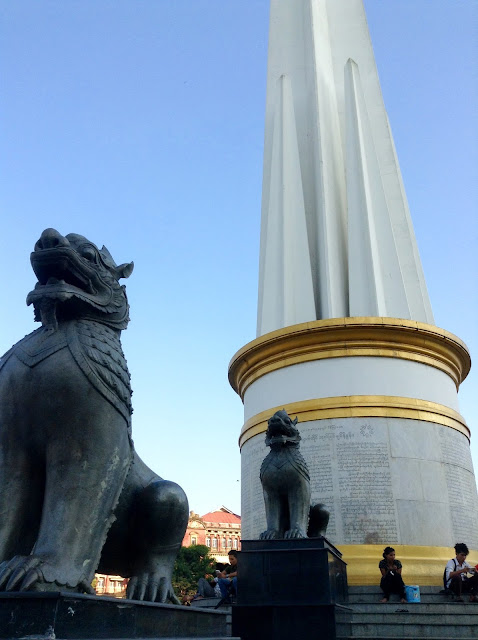 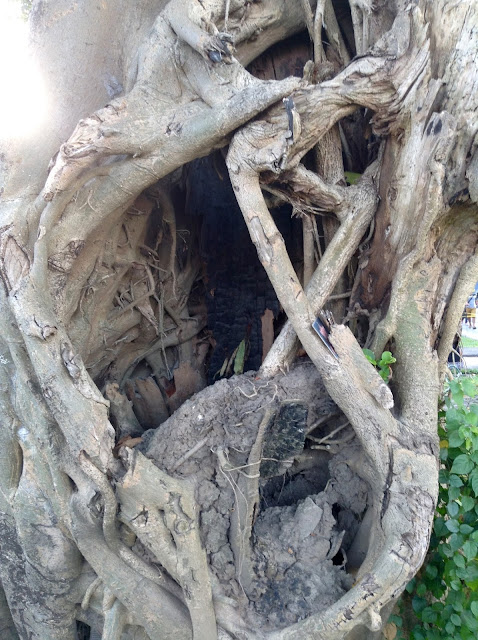 The Garden was stunningly beautiful. On my walk over there, I took a few pictures of random things I saw on the streets. I sat down to review them and was approached by a young lady trying to sell me thanaka, which is gold powder people use as makeup and sunscreen. I politely refused, but she was incredibly persistent. She sat down next to me to plead with me, which is an unusually pushy move. I finally gave in when she lowered the price by more than half because I just wanted her to go away. As soon as she had the cash, she triumphantly walked away. That was when I noticed that my camera, which I had set down next to me to argue with her, was missing. No wonder she walked away so quickly -- she stole my camera. It was gone. This is the first time in all of my travels that I have ever had something stolen from me, and I couldn't help but feel angry, sad, and mistrustful of all the people around me.

Like I say, Yangon was not my favorite. In my first 24 hours there, people were rude and I had something stolen from me. Most people who have traveled to Myanmar raved about the kindness of the people and the lack of pushy selling to tourists. Perhaps things are changing in this country that has so recently opened its borders, perhaps I just had a spot of bad luck. In any case, the country did not make a great first impression on me, but I did have some fantastic adventures. More coming soon!
Posted by Unknown at 2/07/2016 06:15:00 AM